Suman doesn’t believe in miracles, all she believes is in razor-sharp focus and hard work. A person maybe capable of achieving what they always dreamt if and only if there’s an unending passion and determination. Her strength of hard work comes from seeing the crown. Ever since she became Miss Gujarat back in 2011 , her affinity towards Beauty Pageant has only been growing day by day. In 2017, she reached a step closer to Dream by being Ahmedabad City Finalist in Yamaha Fascino Miss Diva 2017. Her aspiration to carry the crown on her head for her country as the whole world is watching her, works as a driving force for her. Did you know that Armadillo shells are bulletproof? Just like the Armadillo, she is strong enough to fend off whatever comes her way! In 2018, Suman got trained by Miss Ritika Ramtri (The Tiara Pageant Training studio) Pune for Participating in Miss Intercontinental 2018. Fitness Training was given by Master Raashid Shaikh. Que-Ans. Session was assisted by Rebecca Sudan.

Unfolding the recent victory after hard work of 2  years, she won and was crowned as – MISS INDIA INTERCONTINENTAL 2018 on September 11. Confidently Beautiful Queen is honored to represent India on grand and prestigious platform of MISS INTERCONTINENTAL 2018 for 20 days in Philippines amongst 91  other countries, from 7th January to 26th January, 2019.

With calm and hard work, her glory has bagged two records into the history of books. 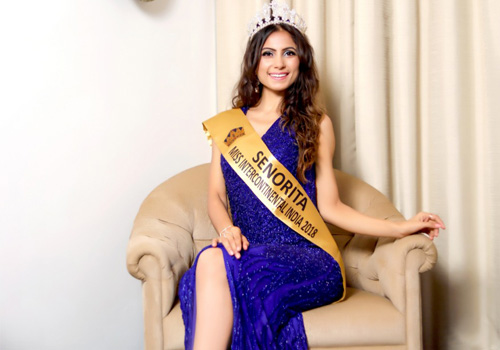